Racism is a system that disadvantages one group over another through economic, political, and ideological practices and policies.  Structural racism reflects the history of US policies that serve those in power in a society.  Those in power who own companies or control financial institutions (the ruling class) need to increase their profits by holding down costs and speeding up production.  From the beginning of US history, the planters looked for the cheapest labor and chose African men and women to work their land.  To justify their choice, they promoted the concept of race-that African people deserved enslavement while European white people could be “free” and earn wages.  The ruling class, the landowners and bankers of that time, structured society to give themselves power and access to wealth while relegating the workers to low or no wages based on what they defined as “race.”

To justify this decision and garner the public’s acceptance, the rulers create racist ideas, such as stereotypes.  They teach white workers that they are superior to others and that the more oppressed workers deserve their poorer conditions because they are not intelligent or hard working.

Racism arose when 16th Century European rulers set out to steal resources, such as tea, sugar, tobacco, cotton, from Asia, Africa, and the Americas, and develop markets for their products.  Most if not all the non-Europeans attacked had darker skins, allowing the early colonialists to justify their conquests by portraying people with darker complexions as inferior and fair game for enslavement and theft.  These colonizers ravaged African countries, stealing its young productive people and disrupting trade and national boundaries (Walter Rodney’s How Europe Underdeveloped Africa; WEB DuBois’ Africa and the World). 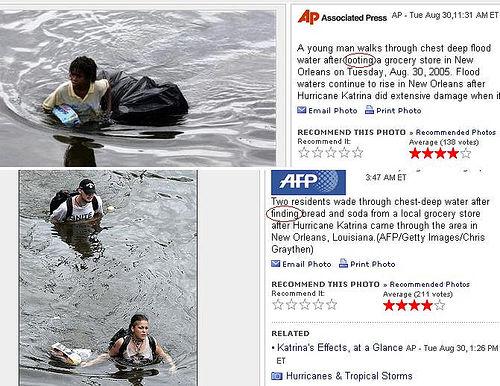 To some, it is only a set of stereotypes that prejudice us against a group of people.  These stereotypes seep into our minds so we associate negative images, such as criminality, with a specific group, such as black men.  The news, media, and racist organizations like the Minutemen, an anti-immigrant group, perpetuate these images. People then act on these myths by blaming oppressed groups for their reduced social status.  “If someone is lazy or a drop out, no wonder she is unemployed and poor” is what some may say.  We don’t have to change any social policies because the problem derives from these racial or ethnic traits.  During the 1960s academics like William Shockley claimed that the darker the complexion the lower the IQ of a person.  These stereotypes and prejudices comprise interpersonal racism.

When people adopt and believe in these stereotypes, racist ideas may become internalized by the victims.  Black or Latin people may believe that white people really are smarter or better doctors because they are white.  Camara Jones, a noted public health activist and scholar, characterizes internalized racism as “the white man’s ice is colder.”  It damages the confidence and self-esteem of undervalued groups, and creates great mental distress.  When stereotypes label black women as “angry,” black women may hesitate to express that anger and fight against the injustice in their lives.  The CARDIA study associated repressed anger against racism with elevated blood pressure (http://www.ncbi.nlm.nih.gov/pmc/articles/PMC1380646/pdf/amjph00521-0028.pdf).

Racism serves critical functions under capitalism, which could not survive without it.  The major functions or purposes of racism are economic, political, and ideological.

Racism creates enormous profits for business owners.  Slavery created enormous wealth for the planters who owned the cotton fields and the enslaved people, the shipbuilding industry in the North, and the expanding textile industry in the US and England.  Investors used enslaved people as “credit” or collateral for bank loans.  Enslaved black workers allowed US capitalism to grow and dominate the world. (Edward Baptist’s The Half Has Never Been Told: Slavery and the Making of American Capitalism)

After the Civil War and Reconstruction, sheriffs arrested black men and some women and white men, and charged them with minor crimes like loitering or looking the wrong way.  When the arrestees could not pay the inflated court fees, the sheriff sold them to industries to “pay off” the debt.  These steel, turpentine, mining and farming companies worked them to death, housing them in barbaric conditions. Republic Steel, later known as US Steel, got its start using this “convict labor.”  (Douglas Blackmon’s Slavery by Another Name)

Today, black and Latin workers earn far less than white men.  In Washington, DC, women of all “racial” groups earned about 77 cents for every dollar white men made.  However, black women earned 45 cents and Latinas earned 35 cents for every dollar earned by white men.  The differences in earnings generate profit for the employers.  While all workers earn far less than the value of what they produce, black, Latin, and many immigrant workers earn far less.  Corporate bosses outsource much of their business to other countries where workers make unlivable, poverty level pay.  This is called exploitation.  It affects all workers, but black workers experience exploitation much more than others.

Unemployment creates a pool of workers looking for jobs, the “reserved army of the unemployed.”  Employers use them as a threat to employed workers: “if you complain about your job, we have many others waiting to take it.”  Black workers historically have double the rate of unemployment of others.  Young black people, like those in Spain and Greece, suffer a 50% unemployment rate.  Half of the young people have no job!  Those who do experience temporary, low paying, and insecure jobs that generate substantial profits to the employers.  Many of these workers are poor whites and immigrants.

Poorer or non-existent medical, educational and social services also generate considerable savings for the government and business owners.  Black workers who are poor live in neighborhoods with worse schools, scarce access to good food and safe recreation whereas impoverished white workers tend to live in better resourced neighborhoods so they have more opportunities for good schools and other benefits.

Who is part of this ruling class, also called the 1%?  The US ruling class consists of the owners of financial institutions and large corporations, such as Bill Gates of Microsoft, the CEO of Gilead Sciences, the pharmaceutical company, Exxon-Mobil, and the Walton family of Walmart.  They and their class OWN the wealth of the US and exercise their power to determine domestic and foreign policy, including drug prices, wages, and war.  Never elected, these capitalists make economic and political decisions through their bought-off flunkies in government.  Some, like Lawrence Summers, served in the Cabinet, advising the President and establishing important fiscal policies that affect the public. This class, predominantly white men, have the real power.

The vast majority of people work for a living, exchanging their labor for a paycheck.  This relationship to the owners determines membership in the working class.  If you work for a boss to get a wage or salary, you are a worker.  Therefore, high income earners, such as doctors, are workers as well as the majority of people who barely earn a living wage.

People in this group, the so-called 99%, have many different characteristics, such as income, nationality, gender, racial classification, sexual orientation, and gender identify, religion, etc.  However, they have much more in common than these identities – their class and relationship to the ruling class.  They are all exploited to one degree or another.

Exploitation occurs when business owners pay their workers less than the full value of what they produce, the profit.  A fancy dress may sell for $1000, but the workers may only earn $100 to produce it.  The money left over after paying the workers (and other costs) is the profit.  The owners make even more profit when they pay black or immigrant or Bangladeshi workers less than others. This is often called super-exploitation.

Employers and owners benefit from exploitation and especially from the racism that creates the cheapest labor in the world.  Slave owners used enslaved people as currency, credit and collateral that enriched banks and industries around the world.  Enslaved workers created the foundation and domination of US capitalism and enabled the development of the shipping and textile industries in the North (Baptist).

Researchers estimate that the use of free labor and subsequent discrimination generated $6-10 trillion in profit.  The differences in black and white wages continue to create additional profit, often called super exploitation. (Joe Fagin in Racist America, 2000).

This wealth does not go to white workers.  White workers are also exploited, not earning the true value of their work. It is a matter of different levels of exploitation.  When one group’s wages and benefits are lowered, it is only a matter of time before all workers experience such cutbacks.    White workers have every reason to join with black and other workers to fight for reforms, such as living wages, or revolution to eliminate a profit system.

Racism serves an important political function for those in power. It divides workers by blaming black, immigrant, and brown workers for their own poverty.  During unionizing struggles that excluded black workers, the steel bosses used black workers to break the strikes, turning the striking white workers against the black workers.  Today, many black workers blame immigrants, including Africans, from stealing their jobs and driving up health care costs.  Often, these divisions culminate in violence when the ruling class funds and protects racist lynchers and hate groups.

The ability of racism to divide us maintains our oppression and deprives us from benefiting from the contributions of all people.

Racist images and stereotypes depict black, Latin, Asian, and indigenous people as inferior and different than whites.  Depending on the racial or ethnic category, they are portrayed as criminal, devious, hyper-intelligent, or hyper-sexual.

The ruling class owns and controls the media that disseminate these portraits through print, radio, movies, and digital formats.  During Hurricane Katrina, the Associated Press published 2 pictures of a white couple and a black man carrying bags of groceries through flood waters.  The caption described the white couple “carrying” a package while the other one described the black man “looting” a store.

So called scientific theories also promote racist ideas when they measure intelligence by skin color or claim that black boys are predisposed to violent behavior.  These theories and media images create the myth of “otherness,” that groups of people are different and inferior to the majority group.  Rulers use “otherness” to justify warfare against the “enemy,” police violence, and environmental injustices.  Viewing people as different or inferior makes it easier for the public to accept war and cutbacks in social services (until it happens to them).  Today we see attacks on Muslim people and refugees from the Middle East, Asia, and Africa painted as terrorists and “eligible” for abuse.  Right-wing, fascist neo-Nazi gangs develop from the promotion of these ideas.  Anti-racists have confronted these ideas and the gangs in the classroom and street.

Racism is intentional, not an accident.  We can fight racism at all of these levels, the personal, ideological, and structural.  Multiracial solidarity across borders allows us to learn from people experiencing oppression and unite against our exploiters.