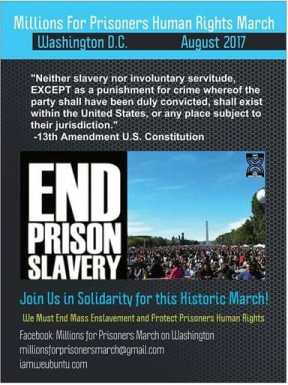 By Tomiko Shine and Charlotte Malerich

This Saturday, August 19, the Aging People in Prison Human Rights Campaign (APP-HRC) marched with dozens of other organizations and thousands of concerned individuals to end slavery in the U.S.

American school children may be taught that slavery was abolished with the ratification of the 13th Amendment to the Constitution.  And it was–“except as a punishment for crime whereof the party shall have been duly convicted.”  In other words, slavery was legal as long as you label

ed enslaved people criminals first.  As the Jim Crow regime took hold, laws were written and enforced selectively to incarcerate African Americans, who could then be exploited as convict labor.  As the organizing of the Civil Rights Movement and rebellions throughout the ’60s and ’70s ended segregation and open racism, the new War on Drugs took Jim Crow’s place and accelerated the incarceration of Black men and women, along with other people of color and the poor and marginalized of all races.  (For further reading, see Slavery by Another Name by Douglas A. Blackmon and The New Jim Crow by Michelle Alexander.)

Although there have been some very recent reforms to sentencing and decriminalization for drug offenses, keeping some young people out of prison, we are still very much feeling the effects of decades of racist policing and harsh sentencing, most reflected in the age of the prison population.  Mandatory minimums in the ’80s and ’90s mean that the teenagers and twenty-somethings locked up then are approaching old age now.  According to an ACLU report, there are now 125,000 inmates aged 55 or older now behind bars.  This represents an increase of over 1,300 percent since the early 1980s; by 2030, the number could be as high as 400,000.  These elders experience all the struggles of aging, from declining mobility and eyesight to dementia, in facilities that aren’t equipped to make them comfortable, safe, or respected.  Prisons don’t have sit-down showers or handrails in the hallway.  Their children and grandchildren, if able to see them at all, must visit behind bars.  And although they cannot reasonably be considered the same person they were at 19 or 20-years-old, or pose any great risk of re-offending, still parole boards and governors too often are content to let them die behind bars — just as enslaved African Americans in the anti-bellum U.S. could expect to die in chains.

The Millions For Prisoners Human Rights March is a call to finish the work of Frederick Douglass, Harriet Tubman, and John Brown; to amend the 13th amendment; to finally end legal American slavery.  Not only this, but marchers are calling for a Congressional hearing on the enslavement clause of the 13th as a violation of human rights, and for a full accounting of its direct relationship to:

We who organize with APP-HRC hope this movement will finally mean freedom for more people like Larry Yarbrough, who spent over 50 years in prison after officers “found” an ounce of cocaine in his house; or Zerious Meadows, who was incarcerated at 15-years-old in 1971, now in his ’60s; or Eraina Pretty, whose daughter was a one-year-old baby when she was locked up, and is now a grown woman of 40 with two children of her own.  By focusing on the human rights of these prisoners, we hold up their humanity and demand both compassion and justice.  March with us!!  More to follow.