As I write this, Critical Race Theory debates dominate the media, school board meetings, state legislatures, and university campuses. The Oklahoma City Community College canceled a course that discussed white privilege. Politicians in eight states have outlawed its teaching, and nine more are considering legislation to do so (https://www.heritage.org/data-visualizations/education/critical-race-theory-legislation-tracker/). Antagonisms at several school boards led to the cancellation of face-to-face meetings to avoid physical fights. Florida already passed legislation to ban its teaching and requires civics courses to include “portraits in patriotism” … to tell stories and “first-person accounts” of victims of ostensibly communist governments which are then compared with the more supposedly democratic US.” Florida’s Duvall County School Board fired a teacher for hanging a Black Lives Matter flag in her classroom. Texas passed a bill that prohibits teachers from discussing any theories of racism. For example, one section of the bill prohibits lessons that make:

“… any individual (should) feel discomfort, guilt, anguish, or any other form of psychological distress on account of his or her race or sex”

Another section prohibits teaching that:

“meritocracy or traits such as a hard work ethic are racist or sexist, or were created by a members of a particular race to oppress members of another race (https://capitol.texas.gov/tlodocs/87R/billtext/pdf/HB03979I.pdf).”

Proposed bills in other states call for putting cameras on teachers to reveal whether they teach the “wrong” ideas and outlaw any student demonstrations for social justice issues. University faculty in Florida will be required to register their political positions, and students and faculty will have to take surveys about their beliefs, and students must pass a “civic literacy” exam to graduate. If these beliefs deviate from the conservative, racist ideas of the state, the state legislature can remove their research projects and funding, seriously imperiling their jobs and increasing self-censorship.

What is this theory? Why has it generated so much opposition and disinformation? Why is racism so vital to capitali

END_OF_DOCUMENT_TOKEN_TO_BE_REPLACED

It is six months since our last comment on Biden, and so it is time for an update. Having replaced strident Trump rhetoric with his measured tones and having succeeded in vaccinating half of the population, Biden is seen by many as the savior of our sanity, safety and wellbeing. Although it is a relief to be free of senseless racist ranting and in less fear of Covid-19, we should have no illusions that Biden is even attempting to fill the caverns of need of millions of workers for housing, health care, education, jobs and food. Instead, he remains the servant of the wealthy, the capitalists, as he tries to assuage our fears of the future.

END_OF_DOCUMENT_TOKEN_TO_BE_REPLACED

In Prince George’s County, Maryland, antiracist activists are bringing national issues into local neighborhoods by fighting vaccine inequities, police violence, imprisonment, and housing injustice. This blog advocates for multiracial unity and anti-capitalist politics. It supports organized, coordinated movements independent of electoral politics that include direct action and political education: walk the talk! While many activists participate in demonstrations and national and international campaigns, it is essential to recruit neighbors to sustain a mass movement against racism in their communities and on the job.

This article describes several campaigns in this County and beyond, our challenges, and opportunities, and recommendations for other places.

END_OF_DOCUMENT_TOKEN_TO_BE_REPLACED

As this is being published, Amazon announced that it won the vote on unionizing the plant in Bessemer, Alabama. Workers at the warehouse launched a union campaign last year to improve working conditions and pay. As of April 9, 7:00PM EDT, the initial count is 1,798 opposed to 738 in favor (out of approximately 6,000 voters). Amazon and the union intend to challenge the validity of some votes.

The workers’ efforts could still spark an international movement at other Amazon centers and in other industries that deliver unlivable wages, poor benefits, and unsafe working conditions. Workers at Walmart, Target, and fast-food restaurants may also be inspired to form unions, threatening the owners with a rebellious workforce and a loss in profit. A disproportionate number of workers in these industries is black, immigrant, female, and Latin. Their role as essential workers and their poverty create disproportionate exposures to Covid 19. Over 20,000 out of 1.3 million (2%) Amazon employees have contracted Covid 19 as of October 2020.

Placing the fight for economic security at the jobsite sharpens antiracist and class struggle beyond the legislative approach in the Fight for 15 campaign. Unions may not win every campaign or contract demand, but they provide a structure for workers to engage in many struggles, such as housing reforms, anti-war movements, and other activist mobilizations. It is important for all of us to support the Amazon workers in all ways possible.

This post will present the issues behind the Amazon organizing, its significance to the working class, the ways we can help, the current and historical role of black workers in the labor movement, and how an egalitarian society could deal with consumerism.

END_OF_DOCUMENT_TOKEN_TO_BE_REPLACED

In 1917 in Petrograd, Russian working-class women held a militant march (pictured above) that launched strikes and revolutionary actions that established socialism in Russia. Lenin celebrated the role of working women in the Russian revolution as the Bolshevik Party endorsed International Women’s Day:

“For under capitalism the female half of the human race is doubly oppressed. The working woman and the peasant woman are oppressed by capital, but over and above that—they remain in ‘household bondage,’ they continue to be ‘household slaves,’ for they are overburdened with the drudgery of the most squalid, backbreaking and stultifying toil in the kitchen and the family household.”

Today, we see rote, performative recognition of Women’s International History Month by politicians, the media, and companies who advertise sales to commemorate it while maintaining conditions that oppress women workers.

This article describes the role of capitalism in women’s oppression, the effects of Covid 19 on women, examples of women workers organizing against sexism and capitalism, and a class-based strategy to abolish sexism.

END_OF_DOCUMENT_TOKEN_TO_BE_REPLACED

by Linda Green and Karyn Pomerantz

Capitalism uses police as agents of social control in our neighborhoods, jobs, and schools, using their power to put kids on a school-to-jail pipeline. In 2013-2014, school police in 8000 schools arrested 70,000 students with black children overly represented (Ed Week). Detentions and arrests of students can affect college admissions and future incarceration. Criminal justice reformers have been fighting for years to interrupt this pathway by freeing schools of police and punitive policies like the use of metal detectors. Such measures do not prevent violence or its causes, and create an antagonistic climate. Parents, politicians, and teachers take different positions, some claiming School Resource Officers, SROs, are necessary to ensure safety and others protesting the increased risk of arrest and brutality mostly directed to black and Latin students as well as those with disabilities.

Alternate methods to deal with behavioral problems in the schools exist. Researchers have shown that students who face racial discrimination are more likely to feel alienated in schools, disengaging from them by dropping out or not trying academically. Supportive teachers who acknowledge and show interest in students’ cultural backgrounds help mitigate this alienation (Bottiani, Gottfredson). Abolitionists point out that SROs do nothing to prevent mass school shootings, and a simulation study verified this finding (Child Trends).

END_OF_DOCUMENT_TOKEN_TO_BE_REPLACED

In The Sum of Us (2021), Heather McGhee refutes the pervasive idea that racism, specifically white supremacy, benefits white workers. She contradicts the paradigm of a “zero-sum game” in which gains for black workers diminish the economic and social status of white workers. Instead, she advocates for “social solidarity” that would create a “solidarity dividend” that enriches the lives of all workers.

McGhee is another liberal capitalist author who has stong antiracist arguments but a weak analysis of the role of capitalism that requires racism to create profit and enforce divisions among workers. Liberal reformers, such as Sanders, the Ford Foundation, and unions, try to preserve capitalism by making it more equitable. McGhee was president of Demos, a liberal think tank for economic reforms. Her book reflects the insights she gained there.

END_OF_DOCUMENT_TOKEN_TO_BE_REPLACED 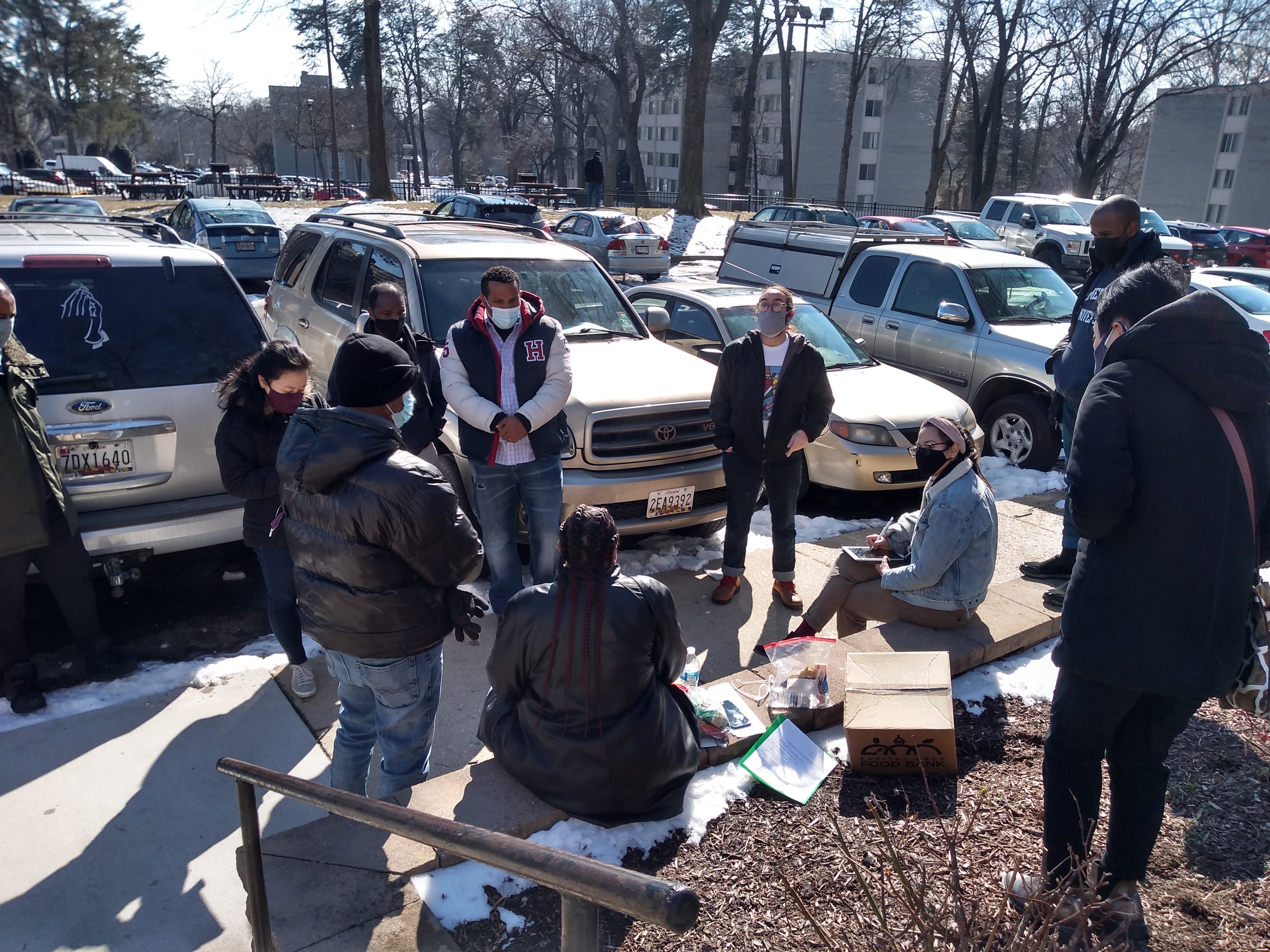 Organizers mobilize for outreach to tenants in Mt. Rainier, MD

Over 30 million people face evictions from their homes during the deadly Covid 19 outbreak.  Losing housing is nothing new. As neighborhoods gentrify, public housing deteriorates, and people lose jobs, more people have no or unstable homes. The US lost four million affordable housing units and seven million apartments for low-income residents over the last decade.  Before the pandemic, 25% of renters spent 50% or more of their income on rent, and 25% of people under the poverty line spent 70%  (Aspen Institute)! This serves the financial interests of the developers and banks who build and finance luxury, high priced apartments and houses, adding to the oppression of the entire working class. Since black, Latin, and indigenous people earn less and face higher rates of unemployment, this situation exacerbates the racism fundamental to capitalism. Larger proportions of families of color, including Asian families, expect to apply for assistance. Families with children have higher eviction rates, causing long-term trauma and other health problems.

The pandemic has worsened housing security. What kind of society kicks people out of their homes during a public health crisis!? Obviously, the drive to profit off of workers’ lives has no limits. The moratoriums on evictions only postpone pay-up day. Despite the federal moratorium and financial assistance to landlords, property owners apply laws that allow them to evict, such as requesting evictions for people who stay in their homes past their leases. As of March 1, 2020, a judge has ruled that the moratorium is illegal, throwing millions of people into limbo.

END_OF_DOCUMENT_TOKEN_TO_BE_REPLACED 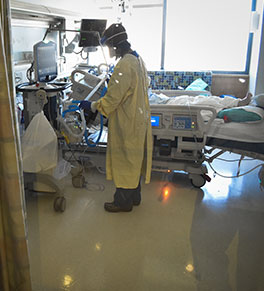 Racist healthcare rationing is nothing new under capitalism. Enabling enough people to work and produce profit is the major imperative. There is no need for universal health care unless the economy is threatened as we see with the Covid-19 pandemic. Wealthy people can always buy themselves the care they need, whether it’s meds for Covid-19 or HIV drugs. As Cuba, China, the USSR, and Partners in Health in Peru and Haiti (Netflix’s Bending the Arc) proved, public health workers can take health promotion and treatment to millions of poor people through prioritizing health as a social good and organizing community members to deliver care and prevention. Unfortunately, without workers holding power, these improvements can be defunded and eliminated.

The article below describes the life-threatening situation when hospital administrators ration vital supplies and staff in a respiratory therapy unit in Chicago and how workers opposed these practices. It is part of our series on organizing at work and in the community.

END_OF_DOCUMENT_TOKEN_TO_BE_REPLACED

The surge of wild fires in the state of California — the ravages of climate change, the greed and incompetence of utility companies, the corruption of politicians, the ongoing power shutoffs, the suffering of millions of workers who lose power, money, food, health and safety – no tale better illustrates the death-dealing heartlessness and dysfunctionality of capitalism, even in one of its most “progressive” outposts.