Overturning a woman’s right to abortion is the latest effort to keep women powerless, providing free domestic labor in the home and under the control of the male-dominated state.

It is not the first attack. Seventeenth century witch hunts stigmatized and murdered outspoken women. Slavery turned black women into child and wealth generators for plantation owners. Throughout capitalist history, women have been demeaned and impoverished, especially black, indigenous, and Latinx women, in order to make extra profits. This article documents how capitalism oppresses women and argues that abortion supporters must broaden their demands to address the broader role of sexism under capitalism.

END_OF_DOCUMENT_TOKEN_TO_BE_REPLACED

In 1917 in Petrograd, Russian working-class women held a militant march (pictured above) that launched strikes and revolutionary actions that established socialism in Russia. Lenin celebrated the role of working women in the Russian revolution as the Bolshevik Party endorsed International Women’s Day:

“For under capitalism the female half of the human race is doubly oppressed. The working woman and the peasant woman are oppressed by capital, but over and above that—they remain in ‘household bondage,’ they continue to be ‘household slaves,’ for they are overburdened with the drudgery of the most squalid, backbreaking and stultifying toil in the kitchen and the family household.”

Today, we see rote, performative recognition of Women’s International History Month by politicians, the media, and companies who advertise sales to commemorate it while maintaining conditions that oppress women workers.

This article describes the role of capitalism in women’s oppression, the effects of Covid 19 on women, examples of women workers organizing against sexism and capitalism, and a class-based strategy to abolish sexism.

END_OF_DOCUMENT_TOKEN_TO_BE_REPLACED

This month, August 2020, marks the 100th anniversary of the vote for women’s suffrage in 1920. However, the government delayed voting for white women until 1924 and for black women until 1965! The struggle for women’s suffrage is suffused with sexism and racism. Some white leaders, like Elizabeth Stanton, appeased the South’s opposition to the black people’s vote. They sacrificed the voting rights of black women, and forced black suffragists to march in the back lines in their massive 1913 demonstration.

The article, How Racism Weakens the Fight for Women’s Suffrage: Multiracial Unity Is Crucial to Stopping Sexism was published in April 2019 at:

the intersection of racism and anti-sexist politics

the alleged importance of voting

the social and economic status of black and white women

the role of abolitionists in suffrage struggles

The only genuine path to liberation is through a multi-racial, multi-cultural, anti-capitalist movement of both men and women. This movement has to be class-based in nature, not at all like the amorphous marches of recent years. The movement must take as its central and guiding focus the needs and aspirations of the entire working class. To achieve this, there cannot be any divisions based on sex, race, religion, sexual orientation, immigration status, and whatever else the bosses will come up with to divide us. This is our way forward.

On voting, by Rosa Luxembourg:

“It is sheer insanity to believe that capitalists would good humoredly obey the socialist verdict of a parliament or of a national assembly, that they would calmly renounce property, profit, the right to exploit. All ruling classes fought to the end, with tenacious energy, to preserve their privileges. The Roman patricians and the medieval feudal barons alike, the English cavaliers and the American slaveowners, the Walachian boyars and the Lyonnais silk manufacturers – all shed rivers of blood, they all marched over corpses, committed murder, and arson, instigated civil war and treason, in order to defend their privileges and their power.”

The uprisings over the horrendous oppression and killing of black people in the US have united people in ways we have rarely seen. Most protests in the past have been comprised of a single demographic group: mostly white in anti-war marches, Latin in immigration demonstrations, and black in anti-racist protests. The multi-racial and multi-ethnic participation in the rebellions stirred by police violence, disproportionate Covid19 deaths in black and native families, and sacrificial back-to-work decisions creates an enormous potential for working class solidarity and revolutionary change.

END_OF_DOCUMENT_TOKEN_TO_BE_REPLACED 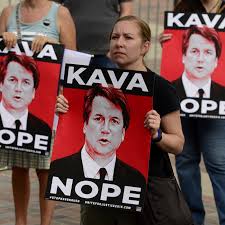 The Kavanaugh hearings and his confirmation as a Supreme Court justice have opened a floodgate of women’s stories of rape and sexual harassment, building on the many recent accounts from the #MeToo movement.  Kavanaugh’s arrogant behavior represents the entitled status of ruling class men who wield their power without consideration for anyone except corporate and right wing politicians.  His danger extends beyond his individual actions to the realm of policy: END_OF_DOCUMENT_TOKEN_TO_BE_REPLACED